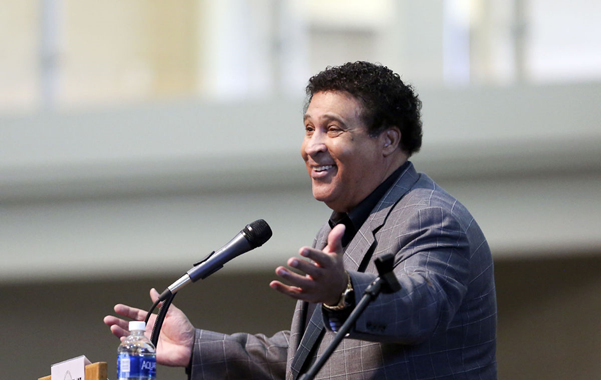 Greg Gumbel’s phone has been “ringing off the hook” since Tuesday. That’s when long-time Dallas Cowboys quarterback Tony Romo announced he was retiring from the game to take on a role as CBS’s No. 1 analyst for NFL games.

Romo will replace Phil Simms, who Gumbel has worked alongside on broadcasts.

During Friday’s Loras College Sport Business Symposium, Gumbel, a 1967 Loras graduate, delivered a town hall-style keynote speech. When asked by an audience member how he feels about Romo’s move to the booth, Gumbel said he doesn’t know how successful the recent retiree will be.

“Nobody knows,” Gumbel said. “I think what CBS is doing is banking on a big name to spread across the field.”

He later added: “TV often likes fresh faces. I don’t know how extensively they talked with Tony. I think they liked — a lot — his personality. But no one knows what’s going to happen when the microphone is on, the camera lights up, when you’re pushing to say something intelligent and pertinent in less than 15 seconds, and there are some guys that simply can’t do it.”

Gumbel said that’s not too unusual. Earlier in his address, he said other NFL greats like Emmitt Smith and Ray Lewis didn’t have staying power because they couldn’t connect with audiences. Both were released when their contracts expired.

“It’s kind of stupid to think that someone might be good at one job because they were good at another,” he said. “That’s a presumption that doesn’t always work. In fact, it almost never works.”

Gumbel called broadcasting a career “that can’t be defined.” What works for some in the industry, doesn’t always work for others, and there’s no parallel that can be drawn from most of the primary announcers on major networks. It’s all about connecting with audiences he said.

As for Romo, Gumbel said the jury is still out. However, he’s anticipating a learning curve for the ex-Cowboy.

“My initial thought is, unless he’s an absolute natural at it — and very few people are — I think there’s going to be a little growth for Tony until he figures some of this stuff out,” Gumbel said.