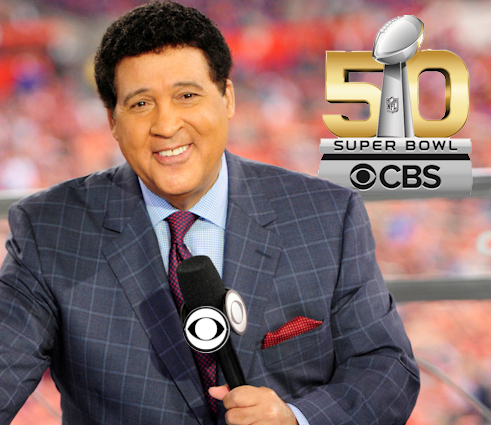 Greg Gumbel will be featured during one of the most intriguing pieces to be aired during the CBS Super Bowl 50 pregame show, "Super Bowl Today". The piece was unveiled by Sean McManus, Chairman, CBS Sports, and it has to do with the six living men who have called previous Super Bowls. Learn the history and valor of one of the biggest games in sports as they reveal what it’s like to call all of the action time and time again.

The match up has been set, Denver Broncos’ Super Bowl veteran Peyton Manning will be making his fourth Super Bowl appearance and looking for his second win as they take on the Carolina Panthers’ Cam Newton in his first Super Bowl appearance. Greg Gumbel will be covering the action in San Francisco with a special show, “Super Bowl Live” starting Monday February 1, 2016 thru Friday, February 5, 2016 airing live from 10 pm to midnight EST on CBS Sports Network. A wide variety of gridiron guests, including Trent Green, Steve Beuerlein, Rich Gannon, Bill Cowher and, Boomer Esiason will be stopping by.

Then tune in to CBS on Super Bowl Sunday at 2 pm EST for the exciting pregame show the Super Bowl Today, in addition to being featured, Greg will also be a contributor.